Before the Congregationalist Dissenters from Wethersfield and the surrounding area in Connecticut came to the area in 1659, Nonotuck (the area where Amherst is) was the land of the the Chichwallop, Awanuske, Umpanchela, Quanquan and their extended families.  John Pynchon brokered deeds for the Dickinsons and other families who received the use of the land by paying wampum.  The people of the Nonotuck were to retain the rights to fish, hunt, gather firewood, plant and set their wigwams in certain areas of the land.   The land was farmed by these tribes who used sustainable farming methods.  The English Dissenters who first settled in the area of what is now Hadley and then moved the area of what is now Amherst in the 1730’s  transformed the land, instituting farming methods using land management that divided the land, grew crops that depleted the soil of nutrients and grazed sheep on the land, changing the environment of Native fields and the surrounding wetlands.  In 1759 Amherst was recognized as separate from Hadley.

Farming remained the main endeavor of most of the town people throughout the late eighteenth and early nineteenth centuries which then experienced a growth of industry and with it, expanded residential and commercial building and a larger and more diverse population.  The construction of the train station in Amherst by the Amherst and Belchertown Railroad in 1853 enabled increased transportation of passengers, mail and goods into town and to other destinations.

Education was and remains important to the residents of Amherst and three higher schools of learning are presently located in the town.  Amherst College was founded in 1821 to educate indigent young men who may not have had access otherwise to an education.  Mass Aggie (now the University of Massachusetts) was founded in 1863 as a land-grant agricultural school and Hampshire College was founded in 1865 to offer an alternative way to study the liberal arts.

The town seal symbolizes the plow and the book, honoring the importance of both agriculture and education. 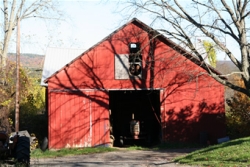 
In addition to the typical crop of corn, settlers eventually began to sow rye and oats, barley and flax as staple grains. Later peas, beans, and pumpkins were introduced as more profitable cash crops. It was not until the 1800s that potatoes were found growing in Amherst. Legend has it that our neighbors in Pelham had to be called upon to teach locals how to successfully harvest this crop.

Though much celebrated today, Amherst’s agricultural history began in the ordinary way, as the basic means for the early settlers and their descendants to make a living. The Town’s commitment to farming was institutionalized in the 1863 establishment of the Massachusetts Agricultural College, a bastion of "Scientific Farming" which over time became the flagship campus for the University of Massachusetts.

When the University expanded during the late 1960s / early 1970s, the sudden increase in student and staff population led to rapid residential growth. This caused Amherst to launch a concerted effort to save its farmland before it was lost to development.

In addition to helping long-time farm families remain in business, the success of these ongoing farmland conservation efforts has in turn inspired and made possible a wave of organic and community-supported-agricultural (CSA) operations. Hampshire College is a unique catalyst for this movement, not only by encouraging a combination of agrarian and ecological studies, but also as the host for 1 of the largest annual organic conferences held by the Northeast Organic Farmer’s Association.

The Amherst societies led an increased interest in agricultural education and scientific agriculture. Amherst College President Edward Hitchcock played a prominent role here, and helped put Amherst on the map as a center of more theoretical agricultural matters. For example, in a speech delivered during this time by Marshall P. Wilder, it was said:

“It is particularly cheering to all who have at heart the advancement of agriculture, to witness the large number of professional gentlemen, for which Amherst is so celebrated, coming forward, with a helping hand, and cooperating with the intelligent farmers of Hampshire county, on behalf of an institution for the promotion of that most important and useful pursuit, the culture of Mother Earth.”

Excerpt from "History of the Town of Amherst, Massachusetts", compiled and published by Carpenter and Morehouse. Even then as a primarily agricultural town, Amherst was proud of its intelligencia.

By the 1840s, the farmers in Amherst began to get organized. Amherst farmers were leaders in forming the Hampshire, Hampden and Franklin Agricultural Society-also known as the Three county Society. By 1851, the East Hampshire Agricultural Society splintered off as an incorporated organization.

These agricultural societies gained their popularity by hosting an annual livestock and cattle show on the Common. Hundreds of horses, swine, and sheep flocked to the town’s center, and it became the largest show of its kind in Commonwealth. Like its present day counter parts, the shows were enhanced by festive music and lots of good food, including baked goods and cider (more likely hard cider in those days).

In 1866, the society sought a more permanent home. They bought land in East Amherst, where they built a hall. Apparently, this was not a popular location, being too distant from the center, and its presence sowed the seeds of discontent amongst Society members.

In 1882, the first Amherst Cooperative Creamery was formed, which built 2 buildings. Producing tons of butter and cream, dairy farming was a lucrative venture back then. In the first decade of operation, the Creamery paid its patrons over a half-million dollars for cream.