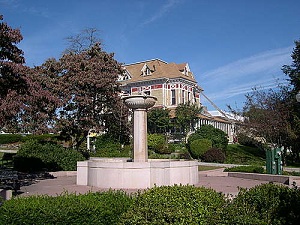 
History
The best example of a classic New England public park can be found here. In 1836, this area was a swampy triangle of land south of what is now called Lessey Street. While in town, a Philadelphia developer envisioned filling the swamp and selling the land for house lots. To prevent development from occurring, Edward Dickinson ( Emily Dikinson's father), a local merchant Luke Sweetser, and two other well to do friends jointly purchased the swampy triangle.

Dickinson, Sweetser, and the two friends turned the area into a mown, private ''open park'' ornamented with a border fence and fruit trees. In 1890, Churchill Street (then ''College Avenue'') was established as a north-south town way, splitting the original private ''open park'' into two pieces. The Sweetsers retained ownership of the western portion, while the Dickinsons kept the area on the east.

In 1902, the private park west of Churchill Street was donated to the Town of Amherst by Luke Sweetser's children - J. Howards and Lucy Sweetser - as an ''ornamental park'' to bear their father's name. In 1913, another well-to-do Amherst merchant, Enos Foster Cook, donated funds for a fountain in this new park. However by the late 20th century, the park had fallen into disrepair. The Cook Fountain and portions of the park were restored in the 1990's.