Early History
Although there were no permanent settlements in Amherst until the 18th Century, the Norwottuck natives had an established village along the Connecticut River in what is now Northampton and Hadley. The area of North Amherst was most likely used in short-term occupations, with “1 native site with probable Early Middle Woodland components located in North Amherst adjacent to the Mill River” (MHC Town Survey: Amherst, 1982).

The forested hills surrounding Puffer’s Pond were hunting grounds and used as a place to gather plant resources for many Native American tribes for centuries. The river, with its steep drop in elevation from the hills in Shutesbury, provided an opportunity for fishing in the pools carved into the rocks. In addition to its value as a food-generating resource, The Mill River corridor and Bay Road (in South Amherst) in its entirety were also part of a Native American trail system used as a main thoroughfare linking western agrarian villages along the Connecticut River with hunting grounds to the east. The Native American trail along the Mill River was called the Nashaway (Nashua) Path, as it connected with a main northern route that went to Nashua, New Hampshire. This path, later used by colonial settlers and recognized as one of the earlier east-west routes, connected residents of Hadley with communities in eastern Massachusetts. 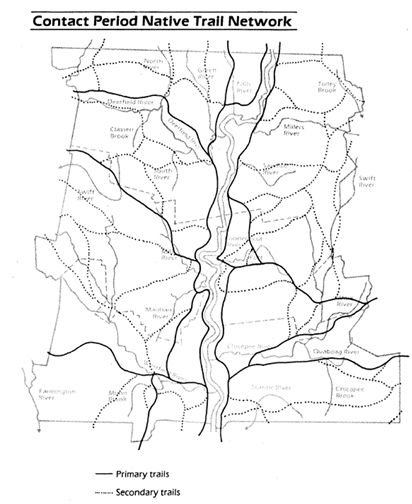 In this watershed, the Pocumtucks, part of the Algonquin nation, claimed the land. Annually they burned the lowland portion of the Mill River watershed, reducing the forest underbrush, which provided better habitat for game and kept the rich floodplain soils cleared for farming. But beyond these changes, their impacts on the land were relatively minor. In contrast, within 2 centuries of their arrival, European colonists had cleared 75-90% of the forest, the beaver population had been extirpated, and many dams had been constructed on the Mill River and its tributaries.

Industrial Development / Creation of Factory Hollow Pond
Puffer’s Pond and its river corridor is a “vestige of the community’s industrial heritage” (Amherst Bulletin, 2007). Although very few extant mills remain, sluiceways, mittens, foundations and building artifacts silently explain that this area was once the economic driver of Amherst. The amount of industrial activity along the Mill River earned the area its nickname of Factory Hollow, with Puffer’s Pond known as Factory Hollow Pond. After Hadley settlers established the Nashaway Path as part of a roadway system in 1716, settlers began in the 18th and 19th centuries to construct mills along the Mill River. The Mill River, with its large drop in elevation from east to west, offered many opportunities for water-powered industrial development.

In the mid 18th century, 2 gristmills and 1 sawmill were operating along the Mill River and Cushman Brook in North Amherst. The first grist mill was constructed in 1727 probably “at the place called the biggest falls” (D.Miller thesis) where a narrow sluiceway channeled water down a 10 foot drop; this is currently the site where East Leverett Road (Bridge Street) bridge crosses Cushman Brook. By 1775, at least 6 mills were operating along the Mill River (D.Miller Thesis), making this corridor such a significant industrial center that local highways were connected to North Amherst and Factory Hollow. Small paper and textile mills lined the Mill River, while in South and East Amherst, small turning mills and palm-leaf hat shops became the major employers in the early 19th century. In North Amherst, in 1808, a number of small paper mills were acquired by Reuben Roberts of Hartford, Connecticut, “beginning nearly a century of Roberts papermaking in Amherst” (MHC Town Survey: Amherst, 1982).

Papermaking mills dominated the Cushman Brook and Puffer’s Pond area in the mid 19th century, when the Cushman brothers built mills successively in 1835, 1859, and 1863, and when Roberts built a second mill in 1848. In order to better harness the power of the Mill River, the Cushman brothers replaced an earlier dam (that was instrumental in forming Factory Hollow Pond) with a more substantial structure in 1850 to help power one of their paper mills (Kestrel Trust Newsletter, 2006). The transient nature of mills and their simple barn-like construction meant that many structures came and went while only their stone foundations remained. Textile mills, mostly constructed during the 1840’s, were 1 type of mill with a short lifespan; by 1860 textile manufacturing had ceased in Amherst. In 1859, the Cushman brothers built the Red Mill on the Cushman Brook, a landmark of North Amherst for decades (the site of the E. Leverett Road Bridge/ Bridge Street). “By 1865, there were 5 mills along the Mill River producing $85,000 worth of papers, the second largest recorded industry in Amherst after palm-leaf hats (of East Amherst)” (MHC Town Survey: Amherst, 1982).

Even though the railroad connected Amherst and Factory Hollow with a larger consumer market, manufacturing technology and a changing economy reduced the profitability of mills in North Amherst. In an effort to make the mills more competitive, a stone masonry, rock filled gravity-dam was constructed in 1895 to replace the dam built by the Cushman brothers in 1850. The dam helped power 5 saw, woolen and grain mills (Amherst Bulletin, 2007). Nonetheless, the mill industry of North Amherst diminished greatly between 1870 and 1940, when fire or demolition destroyed many of the remaining paper mills. Only stone foundations, the rock dam, and Factory Hollow Pond remained, and are still visible today.

Once the mills were gone, the Puffer family owned the dam and much of the land along the Mill River and surrounding Factory Hollow Pond. In an effort to stave off a complete exodus of manufacturing in North Amherst, the Puffer family began an ice harvesting business from the Pond, building an ice elevator in 1912 and an icehouse in 1916 on the pond’s southern shore. The site of the icehouse is now a portion of the South Beach (1970 mgmt plan parcel IIA). For nearly half a century, the Puffer family harvested the ice and delivered it to families in Amherst. By 1948, one of the few remaining mills, the Puffer’s Grist Mill in north Amherst, in the Puffer family for over 100 years, was sold, remodeled and became the Old Mill Gift Shop. The once thriving mill industry that harnessed the power of the Mill River was over.

Town of Amherst-Land Donations & Acquisitions
Long before the Mill River Recreation Area and Puffer’s Pond was owned and managed by Amherst’s Conservation Commission it was a community destination. The land immediately surrounding the pond and river had not been developed because of the terrain and likelihood of flooding, attracting many different types of people who enjoyed the open space. However, as the University of Massachusetts greatly expanded enrollment in the 1960’s, housing development in North Amherst grew exponentially. As private land, increased development pressure threatened the environmentally integrity and scenic value of Puffer’s Pond and the Mill River. The Town had already protected the headwaters of the Mill River (Cushman Brook) by preserving land that surrounded Amherst’s drinking water supplies. In 1941, Amherst purchased approximately 1,200 acres and 4 reservoirs in Amherst, Pelham and Shutesbury to guarantee good water quality. Although the reservoirs were protected, the greenway along the Mill River was vulnerable to development and degradation of water quality and wildlife habitat.

Aware of the ecological value of this greenway, the Conservation Department (Commission) began acquiring properties along the Mill River and Cushman Brook in 1961. The earliest acquisitions were below Factory Hollow Dam, and included much of the flood plain of the lower Mill River that stretched from Puffer’s Pond to Montague Road (Route 63). In 1967, the Conservation Commission opened a ½ mile nature trail in this area with entrances on Summer and Pine Streets, and with numbered posts as guides to trees, ferns, poison plants, and shrubs-conservation and recreation were seen as compatible uses as the public would enjoy walking through the sensitive ecological areas on designated foot trails. After securing a number of properties below the pond, the Conservation Commission acquired land east of the pond along the Cushman Brook. Ironically, land upstream and downstream of the pond was protected, yet the pond itself was not and a gravel extraction operation uphill from the eastern shore continued to draw pond water for their business.

The Ruxton Company, which owned and operated the gravel pit, eventually donated the pond and dam to the Town’s Conservation Commission in 1969. By this time, thirty-7 acres had been acquired for conservation purposes, and with the addition of the pond, Amherst was actively planning a greenway that stretched from Route 63 and the lower Mill River to the upper reaches of the watershed along Cushman Brook. Within this greenway, most of the properties adjacent to the pond and river were protected, safeguarding the corridor’s core from development. With the donation of the dam and pond, the centerpiece of the Mill River conservation area was safely preserved.

Shortly after acquiring Puffer’s Pond, the Conservation Commission focused its effort on preserving the remaining private land adjacent to the pond. Their first action was to purchase approximately 15 acres just north of the pond in October 1970 for $20,000 with $15,000 reimbursement ($5,000 state Self-Help, $10,000 federal BOR). The Conservation Commission had for years tried to purchase “only the wooded bank in order to preserve the integrity of the pond area” (1970 Mgmt Plan), but after acquisition of the pond, S. Puffer Jr. offered to sell the entire property to the Town. The property was an abandoned gravel pit with a wooded steep drop to the north shore of Factory Hollow Pond, and with frontage on 2 roads, it had access and good parking possibilities. Purchasing this property also created a connection across Pulpit Hill Road, a single-lane dirt road, to the Cherry Hill Golf course, a private 9-hole course that opened in 1966 on the Maxson farm property on Montague Road. The Town purchased the course in 1987 for $1,500,000; although recreational land it was supporting habitat for Puffer’s Pond and it helped connect the Mill River conservation area with protected land in Leverett.

Greenway-Quabbin Reservoir to Puffer’s Pond to Connecticut River
The Mill River area in North Amherst runs through a natural greenbelt that connects the Quabbin Reservoir to the Connecticut River, providing an unbroken succession of forestland, wetlands, and fields through which an abundance of wildlife can feed, reproduce, and migrate. An important characteristic of this greenbelt is the many streams and brooks which flow unimpeded from their source to destination. This network of streams defines the watershed that drains into Puffer's Pond and is located in the Pelham Hills area of Leverett, just north of the Amherst town line.

The “Quabbin Reservoir is one of the largest man-made public water supplies in the United States” (Massachusetts State Parks website), with the water’s surface covering 39 square miles. The 181 miles of shoreline are buffered from development by approximately 56,000 acres (87 square miles) of protected open space. The Connecticut River is New England’s longest and most prominent river, and in Massachusetts, its watershed covers approximately 670 square miles. “The Connecticut River drains nearly 1 sixth of New England and provides 70 percent of Long Island Sound's fresh water. Its importance as a natural and cultural resource makes it one of only 14 American Heritage Rivers” (TPL website). Puffer’s Pond and the Mill River is a sub-basin in the larger Connecticut River watershed, contributing to the water quality and overall health of the Connecticut River, and by providing open space and wildlife habitat as a substantial link in the greenbelt.
[]